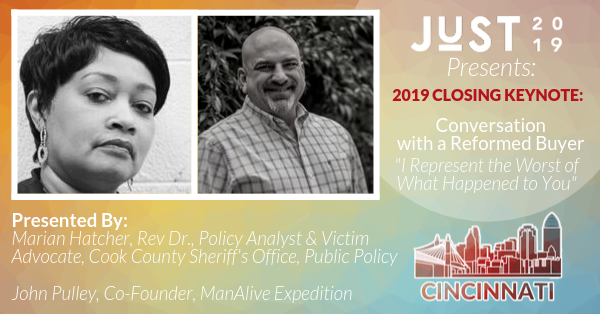 We are excited to announce that Marian Hatcher and John Pulley will be joining us on the JuST Conference plenary stage as our closing plenary!

Marian and John will be presenting, Conversation with a Reformed Buyer – “I Represent the Worst of What Happened to You” on Thursday, October 17 at this year’s JuST (Juvenile Sex Trafficking) Conference in Cincinnati, OH. Visit justconference.org/just2019 to review our workshop agenda and for more information on how to register.

John Pulley: Last summer I had the privilege of speaking at the JuST Faith Summit. I was thrilled to be included in the program and about as nervous as a person can be. Public speaking was not the issue. Speaking as a former buyer to a room full of survivors, advocates, and crusaders was the driver for my nerves.

Marian Hatcher was taking the stage immediately after my session. Based on what I knew of her being a survivor and her history in the abolition movement, I was not sure how my presentation would be received.

A wise person once said, “Unexpected friendships are the best ones.”

Marian’s grace towards me that day forged one of those unexpected friendships. She showed deep kindness in the words she spoke to me publicly before she began her presentation.

As we have had the opportunity to get to know one another through phone calls, text messages, and social media, I have come to respect her dearly. We have discussed the work towards ending slavery. We have discussed our families and history. We have prayed together. We have also given each other insights and perspectives that we would not have gleaned otherwise.

The friendship has been one of mutual respect and honesty and has brought more than its share of the unexpected.

We are genuinely excited to be able to present at the JuST Conference in October.

Marian Hatcher: Yes, we are excited and no, I never expected to be associated with a former buyer let alone become “chums”. Our unexpected friendship is a testament to Gods love, forgiveness, grace and mercy. It was just the thing to do. On the stage in Minnesota that day, I felt such compassion and understanding as John shared with such courage, a part of his journey.

I remembered sharing parts of my story years ago. Of course, I shared as the victim not the victimizer, so there was, in my eyes a different kind of courage required by him. One steeped in deep humility and acknowledgment of terrible, awful actions on his part. All to satiate his appetites for sexual gratification.

As a Christian, as a human being, who has also done terrible and awful things, I found forgiving John a way to free myself of a continuing mental/spiritual bondage, previously unrecognized. My healing continued that day, as did his.

It’s unfortunate his name is “John”(LOL), because today, he’s a pretty good guy. How about we call them what they are “sex buyers”.

Marian Hatcher has been with the Cook County Sheriff’s Office (CCSO) for 14 years where she is now, Policy Analyst & Victim Advocate in the Office of Public Policy. She coordinates several of CCSO’s anti-trafficking efforts such as the “National Johns Suppression Initiative,” a nationwide effort targeting the buyers of sex as the driving force of sex trafficking and prostitution. Marian is a national expert on combating the demand, sitting on numerous boards (including Shared Hopes Advisory Board) and facilitating trainings for the FBI and Homeland Security. She has been featured in numerous documentaries, including I AM JANE DOE. Marian is a 2014 recipient of the Pathbreaker Award and in 2016 she was honored by President Obama with a Presidential lifetime volunteer achievement award.

John Pulley is an author and public speaker. Speaking openly, honestly and without shame, he speaks boldly to the hearts of men who are dealing with sexual addictions of all kinds. As a former buyer and sex addict, he knows firsthand the devastation hidden and minimized sexual issues are causing to individuals, marriages and communities. He is currently finishing a book about his journey into and out of addiction. John is also a consultant to the anti human slavery organization Fierce Freedom and co-founder of ManAlive Expedition, a ministry that is a raw, honest journey into the deep desires and passions of the heart of a man. Like his passion for speaking, the core and primary objective is to create an environment that allows men to connect with and hear from the Father directly – allowing Him to interpret and speak insight directly into their lives.